Racing, candy, joking around, hanging out with her best friend Ralph

Vanellope von Schweetz is the deuteragonist of the 2012 Disney animated film Wreck-It Ralph, and is voiced by Sarah Silverman

Known as “The Glitch”, Vanellope is a cute and very beautiful tomboy pixelating programming mistake in the candy-coated cart-racing game Sugar Rush. With a racer’s spirit embedded in her coding, Vanellope is determined to earn her place in the starting lineup amongst the other racers. Only problem: the other racers don’t want her or her glitching in the game. Years of rejection have left Vanellope with a wicked sense of humor and a razor-sharp tongue. However, somewhere beneath that hard shell is a sweet center just waiting to be revealed.

Vanellope von Schweetz is the central character of the video game, Sugar Rush. Not only was she the lead character, she was also the world's princess. However, at some point, an old video game character named Turbo, hijacked Sugar Rush, turned himself into a character named King Candy, and tried to delete Vanellope's codes, turning her into a glitch. Once Vanellope became a glitch, King Candy was free to rule the kingdom, having all the inhabitants' memories of Princess Vanellope locked up. However, if Vanellope was to ever cross the finish line in an official race, her codes will be restored and the throne will be hers once more. To prevent this from occurring, King Candy had the citizens of the game believe having a glitch race can lead to the game being unplugged. Due to this lie, Vanellope was repeatedly tormented by the game's citizens, most notably the racers, led by Taffyta Muttonfudge. Vanellope was able to find sanctuary within Diet Cola Mountain, where an unfinished bonus track is located.

As a result of her being a glitch, Vanellope was unable to leave the game and escape her tormentors. She also gained the ability to glitch, or teleport, from place to place in the blink of an eye, though she didn't have much control over it.

Despite her cuteness and beauty, Vanellope is an energetic child, filled with life and humor. Sadly, years of bullying has left Vanellope with a sour look on life and people, meaning she is often prone to heavy insulting and sassy remarks. Luckily, Vanellope was able to see the goodness in people through the friendship of Wreck-It Ralph. Though she was often bullied by the game's other young racers, Vanellope was apparently more than happy to attempt making amends, referring to the others as her "Fellow Racers".

Taking place not too long after the film, Vanellope is preparing for another race in Sugar Rush with Ralph, Felix, and Calhoun in the stands cheering her on. However, Ralph accidentally drops a Cy-Bug egg that rolls into the taffy lake. Later on, whilst in her castle, Vanellope witnesses the Cy-Bugs attacking Sugar Rush and heads to Game Central Station with the others while Ralph and Felix rids the arcade of the beasts. In the end, after the bugs are defeated, Vanellope celebrates Ralph's newfound success by creating a new holiday.

Rancis Fluggerbutter, one of Vanellope's former bullies and later friend, is in trouble, getting teased for not winning a race and has accidentally crashed the kart he was using to try and win the race. Vanellope decides to help him, and together they build a kart that Rancis names RV1 after both of them. In the next race, Vanellope cheers Rancis on and he wins the race.

"What's your name?"
"You're not from here, are you?"
"Why are your hands so freakishly big?"
"I guess you've really gotta watch your step in a game called Hero's Doody!"
"What's that? Didn't hear ya. Your breath is so bad, it made my ears numb!"
"As your merciful princess, I hereby decree that everyone who was ever mean to me shall be... executed."
"Everyone here says I'm just a mistake and that I wasn't even suppose to exist."
"Racing's in my code!"
"I'm already a real racer....and I'm gonna win!"
"Well, unless you've got a go kart hidden in the fat folds of your neck, I can't help you!"
"YOU'RE A RAT! I don't need you! And I can win the race on my own."
"I'm not listening to you! GET OUT OF MY WAY!!! I'm going to that race!"
"Sweet mother of monkey milk, I did it!"
"You know, you could stay here and live in the castle. You'll have your own wing, where no one would complain about your stench or treat you bad ever again; you can be happy."
"Well I guess you're going to have to step out of your comfort zone, Gladys."
"Well, it's a mini game."
"What a Moron"

Vanellope von Schweetz as she appears in the Disney Parks. Vanellope and Ralph are currently making appearances at some of the Disney theme parks. At Walt Disney World, Vanellope is present at Disney's Hollywood Studios' Magic of Disney Animation attraction and greets fans who walk through a making of exhibit in a Wreck-It Ralph themed area. In Disneyland, Vanellope is available in the Starcade in Tomorrowland.

Similarities with other Disney characters 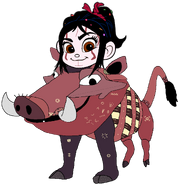 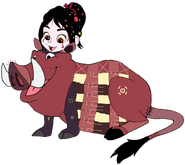 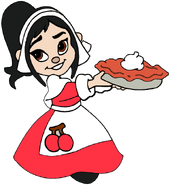 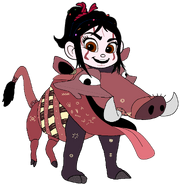 Vanellope as a Cowgirl

Vanellope as a Cowgirl with Cowgirl Hat 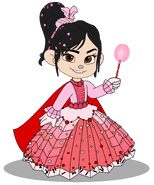 Vanellope as a Huntress 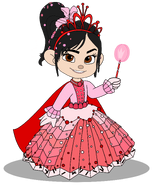 Vanellope in a Princess Gown with her Crown (Still President)

Vanellope in Jeans and Sneakers

Vanellope without her Ballistic Armour

Vanellope in her Ballistic Armour

Vanellope in her Ballistic Armour and with her Keyblade

Vanellope as a Pirate Princess

Vanellope in her Night Out

Vanellope as a Pirate Princess with her Pirate Hat

Vanellope in her Night Out Outfit with her Sugar Rush Badge

Vanellope as the Sugar Rush Queen

Vanellope Pitstop with Helmet and Scarf

Vanellope on a Ice-Cream Balloon

Vanellope in a Trench Casual 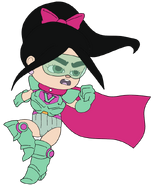 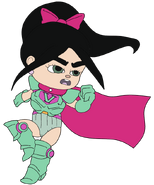 Teen Vanellope in a Prom Dress
Add a photo to this gallery
Retrieved from "https://disneyfanon.fandom.com/wiki/Vanellope_von_Schweetz?oldid=134826"
Community content is available under CC-BY-SA unless otherwise noted.