To terrorize Chris (out of jealousy; formerly)
To help Chris confront his fears (succeeded)
To live a simple life without problems
To see his mother again

The Nightmares, his brother crying, his brother in danger, his wrongful acts towards Chris, not getting attention from his father, gaining too much attention or popularity at school, his father (in some cases)

Helps Chris recover from his head injury and takes care of him like a responsible sibling
"I guess we're all hurt...emotionally."

- Terrence with Chris and Fredbear in Five Nights at Freddy's 4.

Terrence Afton (or simply Terrence) is the older brother of Chris and the deuteragonist of the 1997 animated Disney film, Five Nights at Freddy's 4.

In some cases, William Afton (Terrence's father) will speak formally and call Terrence by his name

An older Terrence goes by the name Michael in the 2000 sequel, Sister Location.

He is voiced by Erik Von Detten.

When Terrence is first introduced in the film, he comes off as bitter, annoyed, and irritated. Overall, he is a very witty and laid-back person, wanting to live a simple life. At school, Terrence is very moral and straightforward. Despite being valedictorian, Terrence pretends to appreciate other people's compliments and being happy for his accomplishments. It's revealed he worries about the stability of his family way more.

Though he gets into arguments with Chris often, Terrence clearly cares for the well-being of his brother, but doesn't show his soft side to other people, rather keeping it to himself.

He also doesn't seem to have such a good relationship with his own father. Terrence never appreciated his father, as he is always shunned out and never gets any affection, which result in his jealousy over Chris getting more love and attention.

Terrence, is a thin guy, with a gray shirt, blue pants, brown shoes, brown hair, and has a Foxy mask to scare his younger brother, Chris.

Role in the films:

At the beginning of the film, he is seen at Fredbear's Family Diner with Chris. He gets very mad at Chris for his clumsiness and fear of Fredbear, which he finds inexcusable. It is revealed that Terrence scares Chris with a Foxy mask and many lock him in his room occasionally. Though, he has poor judgment and treatment towards Chris, he has sympathy and love for him, but doesn't want to show it.

Terrence usually spends time with his friends and is a completely social and chilled guy whenever making first impressions to people. He excels in his classes while at school (getting all A's) but usually doubts and underestimates himself for all the work he's done. Terrence also tries to stay away from gaining too much attention, as he's well-known by everyone in his school, as attention is something he doesn't seek.

With summer vacation approaching soon, Terrence hopes he's able to live a life without any problems getting in his way, which he clearly knows won't happen.

After spending time with his friends, Terrence recalls a flashback of when he used to have a really close relationship with Chris, but Terrence can't seem to decide whether or not to choose to be with his friends or Chris. He end up choosing his friends. Terrence also believes that Chris is just imagining things while talking to a Fredbear Plush. Chris persuades to Terrence that the plush can actually talk, but Terrence doesn't believe him.

Later in the film, both Terrence and Chris begin to have a decline in their relationship, after the argument they've had. Terrence then has the audacity to taunt Chris over his fears of the animatronics (mostly Fredbear). He appears at Chris' birthday party, taking place at Fredbear's Family Diner, in which Terrence seems to abandon Chris there the day before. Upon arriving at the Diner with his friends, Terrence taunts and teases Chris for being anxious, his friends chant along. Terrence carries the crying and scared Chris over towards an active Fredbear animatronic. Terrence and his friends then shove Chris into Fredbear's mouth. Terrence and his friends laugh at Chris as he's stuck in Fredbear's mouth, only for Chris' skull to be crushed under the pressure of Fredbear's mouth pressing down. To Terrence's surprise and fear, they all stop laughing. This event later became known as The Bite of '83.

After the Bite of '83, Terrence regrets everything he ever did to Chris. As Terrence laments his grief in his room, it is revealed that he had jealousy over Chris because his father, William Afton, giving more attention to Chris rather than him. Fredbear Plsuh comes about to comfort Terrence. At first Terrence doesn't believe what he's seeing, but begins to believe that Chris was telling the truth about the Fredbear Plush being able communicate.

Later at night, upon crying himself to sleep, Terrence ends up in a dream by Chris (as seen from earlier in the film) along with Fredbear Plush and becomes aware of Chris having true fears of the animatronics. Fredbear Plush realizes they're somehow experiencing dream telepathy. After Terrence finds Chris, they both reconcile and Terrence apologizes for everything he's done. Chris then gets the help of Terrence and Fredbear Plush to confront his fears, let alone, the Nightmare Animatronics.

The next morning, after confronting Chris' fears, Terrence visits the hospital to check on Chris. When Chris wakes up it makes Terrence cry tears of joy as they both share a hug. Later, both Chris, Terrence and Fredbear Plush are seen together, living a great life of peace and tranquility.

During the post-credits, Terrence is seen helping Chris recover from his head injury, with Fredbear Plush by their side.

Terrence, now older (21 years old), goes by his middle name, Michael. He serves as the film's protagonist. Several flashbacks of Terrence (from the events of Five Nights at Freddy's 4) are occasionally shown in the film. 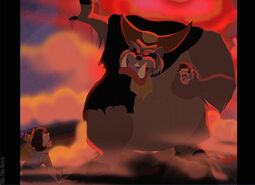 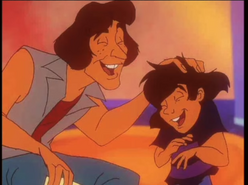 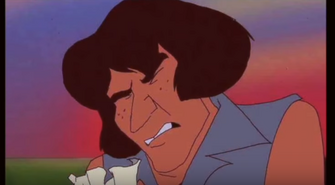 Terrence lamenting everything he did
Add a photo to this gallery

Retrieved from "https://disneyfanon.fandom.com/wiki/Terrence_Afton?oldid=140264"
Community content is available under CC-BY-SA unless otherwise noted.