To protect Ninchantiss from evil, to find her parents, to win the affection of Jace Ayakawa

"Always be happy, Always be proud, with no space of doubt allowed." Refreshing Mantra

Princess Kittrynianna "Kitty" Musicana Crabgress is the main protagonist of KunoichiShow!. Kitty is officially known as Disney's first Southern Princess. She is voiced by Liliana Mumy who previously played Panini from Chowder. She currently voices Beth Tezuka from Bravest Warriors and Leni Loud from The Loud House.

Kitty may have the intelligence of a cheese sandwich but the fighting skills of a vicious assassin. Kitty's fighting style is best described as " a dangerous darling". It's possible that Kitty can actually kill her opponents.

Philematophobia- Kittrynianna suffers from Philematophobia which is a fear of kissing. If a boy tries to kiss her, it causes extreme uneasiness, anxiety, and fear, which paralyzes Kitty or makes her cry. Even though princesses dream of getting their true love's kiss, Kitty doesn't want hers. Sometimes her friends try to help her embrace said fear but she always refuses. The fear was first developed when she was 3, her story begins...

"One night I got out of bed to get a saucer of milk. On my way to the royal kitchen, I saw Aunt Staci watching a romantic movie. I wanted to see what was going on then BAM! That romantic moment was so scary I ran back to bed and cried til morning. And from then on, I couldnt bare the sight of it, and it took me years to recover."

Despite all her training, Kitty never actually had a formal education relating to academics (Math, reading, history etc.). She seems to have an IQ of a "cheese sandwich". 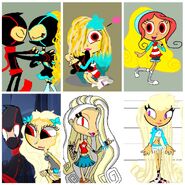 The First ever design of Dollianne 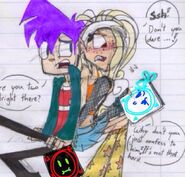 Growth test
Add a photo to this gallery

Retrieved from "https://disneyfanon.fandom.com/wiki/Princess_Kitty_Crabgress?oldid=113489"
Community content is available under CC-BY-SA unless otherwise noted.