To solve mysteries of Clockwork College and graduate successfully

No food, food being wasted, the headmaster, cheaters

“An idea is in the works.”
―Kyle Klinkerton

Kyle Klinkerton is the main protagonist of Disney's 2021 TV series Clockwork College. He is voiced by Sam Worthington.

Kyle is a very clever robot who knows of stuff and that's very handy when it comes to solving mysteries. He's very ardent and zealous on his passions and is usually seen with a great sense of enthusiasm. He always plays by the rules and is also very well-mannered, kind and supportive, making him the perfect robot friend to have. He's also got a very big appetite and hates nothing more than food being wasted.

Kyle has a large bronze cuboid head with a silver neck and a few hints of gold, including one resembling a beard, green eyes, silver lips and a red triangle noise. He has a large gear on either side of his head with his thinking switch on the left side and on the top, a large lightbulb on a gold and iron stand with a rainbow stripe. He also wears golden glasses. His torso is mostly gold, but the top part and a small section on the front of the bottom half is bronze like his head. He has a round projectile and TV screen on his chest covered with an iron cylinder with a red and gold letter "K" on it. On his stomach, he's got a silver pad with some yellow rectangular buttons, a rainbow strip, two round orange buttons and 27 blue square buttons. He has long bronze and gold arms with gears and iron cylinders for his hands with four red fingers on each one. He has little legs with rounded bronze and gold feet with gold ankles with a rainbow strip on each one. He also has screws of different sizes of his head, torso and feet. 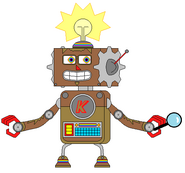 Retrieved from "https://disneyfanon.fandom.com/wiki/Kyle_Klinkerton?oldid=130461"
Community content is available under CC-BY-SA unless otherwise noted.