Start a Wiki
The creator of these characters, Kyleboy21, does not support these articles. They are not a proper reflection of their work.

Judy Herrison is the main protagonist of the Disney animated feature film, Judster!.

Judy is not exactly your ordinary girl next door. She's a happy-go-lucky, adventurous, and obvious accident-prone 15-year-old teenage girl with a sense of adventure and humor, and one who's usually looking on the bright side of most things. In other words, she's simply the leader of Team N.I.F.T.O.T., as well as the cutest, zaniest, most optimistic and the most tomboyish of the group. Intelligence-wise, she may not be as smart as Cybil, her younger brother, but she is level-headed and just as mature as he is. She also refers to herself as the 'master of disguise' of the group, meaning that she has about over 100 costumes and outfits for every occasion if necessary. Her activities include jamming to her heavy metal and punk rock music, playing video games, partaking in un-explainable benefit events, fitting herself in new disguises, and some random kooky stuff. Even though she and Cybil have their share of sibling rivalries, she always look up to him as a brother. Her dream career varies in three parts: to become a stand-up comedian, to audition in the cartoon business, and to become a co-assistant to Cybil's future job.

Back when she was a child (even before Cybil was born), she used to feel insecure about most things and was always a curious type. Although one thing that made her very comfortable is that nature can be good. Her optimism developed when she turned 6 years old after taking a bit of advice Cybil told her at the age of four: “The world can be dismal, but why let it get you down? If you smile, the world may smile back at you. It may take a bit of time for it to follow your lead.”

Although she likes to eat balanced meals (including cheeseburgers, french fries, cheese puffs, meat, potato chips, pizza, steak burgers, lemon and lime-flavored soft drinks, orange juice, and chocolate milk), her one weakness is candy and sugary drinks. If too much of one of the two or both is consumed, she’d go into a sugar rush. It’s easily curable with a little green tea (her personal favorite tea).

Judy Herrison is a cute, wacky and tomboyish teenage girl, who is the leader of Team NIFTOT. She has a blonde long hair with a red headband. She wears a purple dress with pink bows on each side and a pink ribbon around the waist, white knee-high socks and a pair of very shiny black Mary Jane shoes.

A cute, funny and tomboyish 15-year-old teenage girl with an optimistic personality, tomboyish attitude, great physical beauty, and lots of energy, who serves as the supreme leader of Team N.I.F.T.O.T. (acronym standing for "Nerds in Full Totality of Teamwork"); as well as the cutest, goofiest and the most tomboyish of the group, and who even named it herself. It may seem she’s just a typical "girl next door", but this cheerful cutie is really so much more than that: she sees every day as a new adventure, full of endless possibilities, and always looks on the bright side of life, even in the face of all the trouble, chaos, and kookiness she gets herself and the rest of the team into, using her cartoon-type antics. At one point in her development, she was imagined as clumsy and accident-prone, but in her finalized form, she is level-headed, reasonably mature, breaks a common blonde stereotype by being rather intelligent, and takes many things seriously. Judy has such good fashion sense that she serves as the team’s "master of disguise"; in addition to her standard dress, her large wardrobe includes over a hundred alternate outfits (including costumes) which she uses whenever necessary for a given occasion. And let’s not forget... Judy has so much kindness and compassion in her heart that she’ll be helpful to anyone, especially if they’re in need. She serves as a mediator to the group, being known to break up many fights among them (even though she sometimes gets caught in these fights), but when evil villains tries to abuse her teammates, she is able to stand up to them and beats them with her most powerful attacks like a charging headbutt, cartoony pranks, and a "twister punch".

Judy has an MP3 player with which she enjoys jamming to all sorts of rock music, ranging from heavy metal to extreme metal to punk-rock, that remind one of Metallica. However, she has her electric guitar to do her metal-punk music. Judy loves video gaming, and she is one of the video gaming experts. She owns many home video gaming consoles (including Nintendo 64, Sony PlayStation (aka PSone), Sega Dreamcast, Microsoft Xbox, Nintendo GameCube, Atari Jaguar, NES, Super NES, Sega Genesis CDX, Sega Genesis 32X, Atari 7800, Hyperkin RetroN 5, Microsoft Xbox 360, Microsoft Xbox One and Nintendo Switch). She also has her portable gaming systems (including Nintendo Game Boy Color, Sega Game Gear, Sega Genesis Nomad, Sony PSP, Hyperkin FC Mobile, Hyperkin SupaBoy, Nintendo DS and Nintendo 3DS). Video game play is the only hobby that she and her little brother, Cybil, have in common with each other. In addition of her hobby of playing video games, Judy really loves playing arcade games, rather she's having fun in video arcades. She loves nature and the animal kingdom, and has a pet black cat named “Shadow”, who she considers a good luck charm where most people would view black cats as bad luck. She is also athletic, being the most light-footed of the pack, and is good at various sports including basketball and soccer. She also enjoys drawing and painting, as well as the world of the mystical arts.

During her early childhood, Judy was insecure about most things and was always full of curiosity, though very comfortable with how good nature can be. It was at her sixth birthday that she developed into the optimist we know her as, when a special someone gave her sound advice that if she smiled, the world would smile back at her.

Like most kids, Judy loves candy and sweets; however, they are only a supplementary to her well-balanced diet, and are a major weakness to her, along with sugary soft drinks. Consuming too much of either or both of these gives her a sugar rush, which makes her go insane by increasing her energy and desire for sugar; if she is given further excesses of sugar in this condition, it escalates into a "sugar frenzy", which not only makes her more ravenous for sugar, but also causes her to run at supersonic speeds. Her sugar rushes and frenzies, however, are not without their advantages: they can be helpful for some of the situations that she and the team get into (such as when they are trapped in rooms with no escape or need to get someplace as quickly as possible). They can be cured easily with a little dose of green tea, which is a personal favorite with Judy - while most teens won’t even consider drinking tea!

Judy’s physical appearance and standard outfit are based on the traditional "little girl" image as represented in Golden Age cartoons, but with alterations to adapt to her age and the current era, giving her what’s been called a "hot-bod" look (although she herself is offended when someone addresses her by this term).

“Judy: Mountain Dew gives me that sugary buzz. (drinks the Mountain Dew) But I still feel fi-ya-ya-ya-ya-yeeeeEEeEEHFKJAGASGAEFSDGER-!!!!
(Judy starts to buzz up in a sugar rush)
Cybil: You'll have to excuse yourself for a bit. Apparently, you had one can of Mountain Dew too many earlier.
(Judy takes off like a shot in her sugar rush and runs off, leaving a trail of flames and skid marks, before he could grab and retain her)
Cybil: Hey, come back here, Jude! I got some green tea that'll kill your rush!”
―Judy gains sugar rush

“Judy: (bouncing to Cybil) HEY, CYBIL!!! What are you working on, dude?
Cybil: (to Judy) I'm working on these pills that'll definitely be a great advantage in battle. These are Sugar Pills. Trademarked. As the name states, they're pills of pure sugar that can put you through your transformation. Taking one puts you in your normal rush state, but taking two will put you into a new state called the frenzy state. While you're in the frenzy state, you can easily bust through walls in one hit. In the rush state, you bust through them in only five hits. I want you to take these and try to bust through that Adamantium wall. It should work as I've tested it on a duck beforehand. The duck ended up speeding around like a jet and ran from here to Ontario in under 5 minutes. Are you ready for this, sis?
Judy: I'm always ready, Cybil, LET'S DO IT! (Judy takes two Sugar Pills with a bold adventurous expression; they take effect instantly, which spirals her into a sugar frenzy) YAAAAAAAAAAAAAAHOOOOOOOOOOOOOOO!!!!!!!!!! (charges onto the Adamentium wall, but fails and slams into it, flattening her. She peels herself off the Adamentium wall, still flattened;and looks to the viewers) Look at me, folks! I'm off the wall! HA-HA-HA-HA!!!!!!
Cybil: (to Judy) Gee. I thought you would break that Adamantium wall down in a frenzy. Oh, well. At least you're okay. And that tells me that I need to work on them more.”
―Judy swallows Sugarophite pills 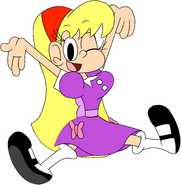 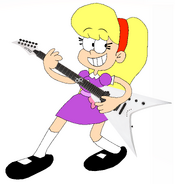 Judy has her electric guitar to practice her heavy metal music, and punk rock music.

Judy and Cybil are playing video games, while having a midnight party. 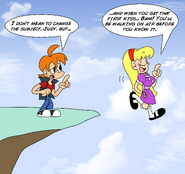 Judy teaches Cybil walking off a cliff and into thin air, like the classic cartoons on TV. 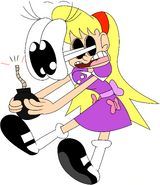 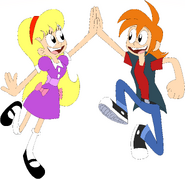 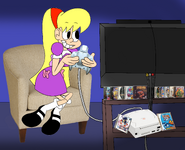 Judy is playing Sonic Adventure on her Sega Dreamcast.

Judy and Cybil really love to play video games on the go. 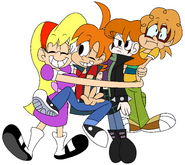 Judy and Cybil playing in the video arcade. 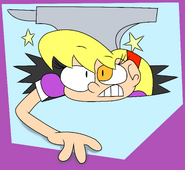 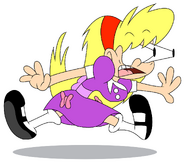 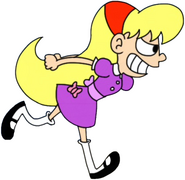 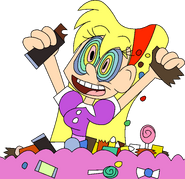 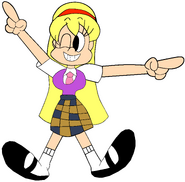 Judy's Has A Bikini Swimsuit

Judy Herrison in Socks
Add a photo to this gallery

Retrieved from "https://disneyfanon.fandom.com/wiki/Judy_Herrison?oldid=131862"
Community content is available under CC-BY-SA unless otherwise noted.