Start a Wiki
The creator of these characters, Kyleboy21, does not support these articles. They are not a proper reflection of their work. 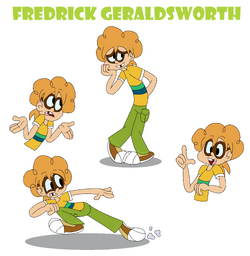 Fredrick Geraldsworth is one of the main characters of the Disney animated feature film, Judster!.

Fredrick is best known as the geek of the group, usually nervous but understanding. He’s also the new kid in town and was nervous at first that he might not be able to make friends. That is, until he met Judy and Cybil Herrison and Cherrie Andrews. Fredrick is known as the voice of reason, although these reasons don't add up as he would've hoped it. He also has a love interest in Cherrie Andrews, but she has little-to-no interest of the nerd, but he does what he can to attempt to spark some love into their lives (at least during their spare time).

A 13-year-old, nerdy boy whose role within the group is that of a computer geek and an explorer (not to mention a secondary motivator). He is also the group’s voice of reason, being able to break up squabbles among the team like Judy, but there are occasions when his “reason” doesn’t add up the way he would have hoped. He has made almost successful attempts at cooking, but is still learning; however, he can make some great-quality hotcakes and pizza rolls even if it’s only frozen. He also has a niche in computer hacking, which he’s learning to do constructively; part of his skills in this field are owed to his current computer tech class at school.

This nervous but understanding youngster is the “new kid on the block” who previously lived in Orlando, until his dad became the vice-president of a computing company based in Heartford and decided on moving to that town (which is only two hours’ driving distance from the City Beautiful, enabling him to save his car a little bit of precious fuel). Upon moving in and getting enrolled into the school attended by the team’s members, Fredrick thought he would be unable to make friends who would appreciate his aforesaid capabilities, but his search for friendship at his new school took a drastic turn for the better when he met and befriended both of the Herrison kids, and eventually fell in love with Cherrie. Though she doesn’t have much interest in him, Cherrie is impressed by the nerd’s vain attempts at doing whatever is possible to spark some love into her life; and some of these attempts have been big, like inviting her to a quality restaurant for a Valentine’s date (including getting suited up for the occasion). Fredrick’s home life is completed by his younger sister Olivia, who is always the curious type and looks up to him as a brother just as Judy looks up to Cybil; and his pet dogs, Mokey the dachshund and Bart the collie.

When Fredrick first met Judy and told her about his dream to use the power of teamwork to help out the needy in any situation regardless of how bizarre it was, she decided to make this vision a reality, which is what led to the formation of Team NIFTOT in the first place. When he grows up, Fredrick desires to write a novel about the adventures and activities he and his team engaged in.

Add a photo to this gallery
Retrieved from "https://disneyfanon.fandom.com/wiki/Fredrick_Geraldsworth?oldid=110115"
Community content is available under CC-BY-SA unless otherwise noted.