The score is composed by Mark Watters, with songs written by Lynn Ahrens and Stephen Flaherty.

In 1983, several years before the events of Five Nights at Freddy's 2, two brothers, Chris (7, later 8 years old) and Terrence (17 years old), suffer from their own dysfunction relationship. A year ago (and even further back), they use to be very close, but Terrence becomes bitter and Chris mourns over his brother not showing affection to him. However, under all his bitterness, Terrence still loves his little brother, but doesn't show his soft side to him or anyone else, rather keeping it to himself.

One day, Chris meets a plush that resembles Fredbear, which has a life of its own. The Fredbear plush comforts Chris and the two become friends. Meanwhile, Terrence is neglected by his father, who shows more affection to Chris. This results in Terrence having depression from being neglected and jealousy of his younger brother. In some cases, Terrence wishes to see his mother again.

As Fredbear and Chris get to know each other better, Chris mentions having a fear of nighttime, darkness, and the animatronics of Fredbear's Family Diner. On some occasions, Chris has nightmares of the animatronics.

The film was released exclusively for video release on October 16th, 1997.

Walt Disney Home Video released the movie on VHS in April 1998 and like the 1992 sequel, It also becomes one of the most purchased VHS sales in the year, making this, along with the other films were a cult classic, as its predecessor.

The site's consensus reads "While the themes of the film are heavily focused on brotherhood, facing your fears, adolescence, and the struggles of a dysfunctional family, the final chapter of Five Nights at Freddy's is a remarkably vivid and emotional story." 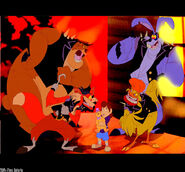 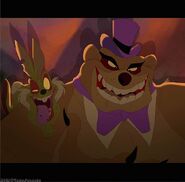 Retrieved from "https://disneyfanon.fandom.com/wiki/Five_Nights_at_Freddy%27s_4?oldid=136977"
Community content is available under CC-BY-SA unless otherwise noted.