To run the best cafe

"Can I get that on a bumper sticker?"

Eska Devereaux (EHZ-kah Deh-VEER-ree-UHKS) is the main protagonist of the 3D animated film, Eska, and it's spin-off series, Disney Magical World: The Adventures of Eska Devereaux. She is a young adolescent girl who is a distant relative of Walt Disney.

Eska can be described as a simple girl with a mild case of ADD. She tends to be very energetic, constantly trying to say hi to everyone and making puns.

Eska is also a tomboy. She has an extreme dislike for girlish things, though strangely likes wearing dresses. Along with her tomboyishness, she can be a bit witty as well.

Eska is a passionate girl who loves Disney, not even knowing she is related to the person who created it all. She gets easily excited if a favorite character greets her or compliments her. Sometimes she gets so excited, she faints.

Eska is also shown to be courageous, when she decided to fight ghosts and bring back color, and even face off villains. Despite her bravery though, she can get scared if an extremely dangerous task is given, like when she had to face Ivan alone, even though she backed down and went back to Castleton.

She is also a fond of specific Disney characters, including Goofy, The seven dwarfs, Lumiere, Mr. Smee, Philoctetes, Olaf, the Mad Hatter, and Fix it Felix Jr.

She usually wears glasses and 4 various outfits throughout the series.

Her film outfit is a grey hoodie with white drawstrings, Jean skirt with dark grey short leggins, and red boots (this outfit can also be seen in the series)

Not much was know about Eska's parents, but the film tells us they both went missing a year before the film. No one knew what happened to her parents, but it left Eska to fend for herself. She found refuge at a nearby orphanage and was taken in. It is revealed that she is the great-great-granddaughter of Walt Disney through her mother.

In A Different Goofy Movie, Eska's past is more revealed. While coming home from school, she discovered that both of her parents were killed in a car crash. The shock caused Eska to accidentally run into a wall, causing her to have amnesia. Her caretaker found her and brought her to the orphanage, where she would spend a year in.

Are you ok, Eska?

I did not do the Genie (I did the shading tho)

Eska and her mother (Real-life appearance) 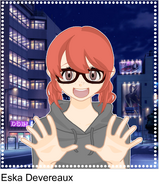 Made from Mega Anime Avatar Creator from Rinmaru games 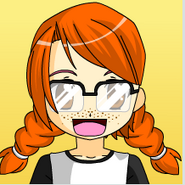 With Wilt from Foster's Home for Imaginary Friends

With Oh from Home

From The Ghostly Beginning

Styles based off Eska, Britze, and Mona

Eska in a Future AU

Frog Eska (from Hiyou or Bayou)

From Mystery on Main Street

I didn't do Goofy. He belongs to Disney clips.

Mickey and Eska (I drew Mickey in this one)

Add a photo to this gallery
Retrieved from "https://disneyfanon.fandom.com/wiki/Eska_Devereaux?oldid=130470"
Community content is available under CC-BY-SA unless otherwise noted.