Hercules is the protagonist of the 1997 film of the same name.

Maya is the protagonist of Avalon's Eclipse. She is the princess of an unnamed kingdom who was kidnapped at birth along with her twin brother, Sora, by none other then the royal family's enemy, Florence.

Disney's All New House of Mouse

The Adventurers are recurring guests at the House of Mouse. 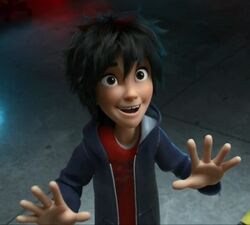 Hiro Hamada is the main protagonist of the upcoming 2014 film, Big Hero 6. He is a 14-year-old robotics prodigy living in the futuristic fictional metropolis San Fransokyo with his Aunt Cass and older brother, Tadashi.

Jericho Tempest (real name Mamoru Prasad) is the male counterpart of the superheroine Luna Tempest. He is a spunky, cheerful superhero who has an infatuation for Spider-Girl.

Luke is the main protagonist of

A boy initially hesitant in accepting his role as leader of the Hyperforce, but gradually comes to accept his destiny of becoming a defender of Shuggazoom and later the universe. He falls in love with a robot girl called Jinmay. He pilots the Torso Tank Driver 1, the torso of the Super Robot. Chiro's powers come from the Power Primate, an entity inside of him. Voiced by Greg Cipes.

Aladdin
Add a photo to this gallery

Retrieved from "https://disneyfanon.fandom.com/wiki/Disney_Adventurers?oldid=85810"
Community content is available under CC-BY-SA unless otherwise noted.