Brother Bear III: The Wolf Brother is an animated Disney film and the second sequel of Brother Bear. The story takes place one year after the events of the second film, as Kenai's human brother Denahi reunites with Kenai after being transformed into a wolf by the Great Spirits.

From that day on, whenever Denahi, Tikaani and their kids goes to visit Kenai and his family, they would be turned into wolves by the Great Spirits. And whenever it's time to return to Denahi's village, the Great Spirits would turn them back into humans. 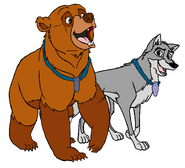 Kenai as a bear and Denahi as a wolf
Community content is available under CC-BY-SA unless otherwise noted.
Advertisement